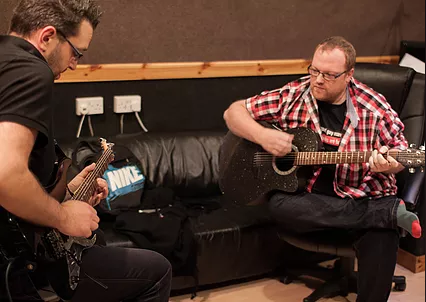 IO Earth is a groundbreaking British Symphonic Progressive band that prides itself in the ability to seamlessly blend genres, creating their own signature sound. Whether the song you’re listening to is Hard Rock with Symphonic Strings, Ambient Trace with Horn solos, or an emotive power ballad with Quartet breaks, you always know when you’re listening to IO Earth.

IO Earth began life as a writing partnership between Dave Cureton and Adam Gough. Having first met in school at the age of 11, their writing and playing styles evolved together over the years, and this has resulted in a unique bond, where their ideas seem to materialise as one. This ability to work so easily together allows for an environment of nothing but creativity and imagination, and that really shines through their compositions.
Often compared to movie scores in its ability to evoke emotion, the IO Earth sound holds something for everyone. It seems impossible to list all of the genres on which they have touched in their ten-year history, over 4 studio albums … but they include Rock, Jazz, Opera, Electronic, Symphonic, Trance, Dance, Metal, Nu-Metal, Folk … the list goes on. 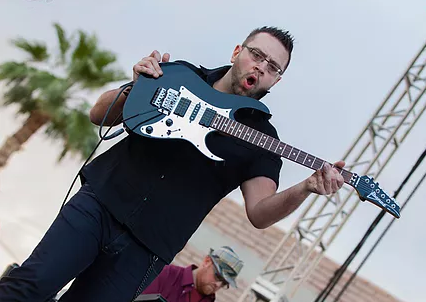 Their album, “Solitude” is a tour-de-force of emotion and is certain to leave you exhausted, as well as upliftied. It tackles the subject of mental health, with a view to helping remove the stigma from conditions such as Alzheimer’s and Depression. These topics are addressed with sensitivity and maturity, and always with a sense of hope. 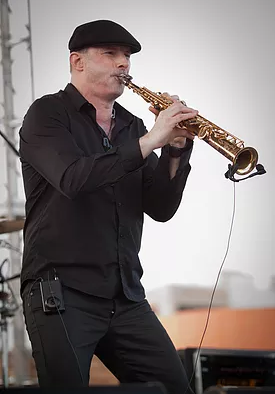 IO Earth is becoming a veteran of the Progressive Music industry, having racked up nominations and awards in a variety of categories over their 12-year career. These have included “Best Debut”, “Best Production”, “People’s Choice”, “Best Guitarist” and “Best Vocalist” from a number of publications, including Prog Magazine and Classic Rock Society. They are the ONLY band apart from hosts Yes, to have appeared on every one of the prestigious Cruise To The Edge festivals since its inception.

Twelve years on, they are still the one band that you simply CANNOT miss.
IO Earth albums are available in our shop:  https://ioearth.com/store
They are also available on all the usual streaming services.
Join our  IO Earth Family on Facebook, to keep up on all news and join the community.