IO Earth is one of the most talked about and critically acclaimed progressive rock bands in the world. This new album will guarantee to push the boundaries of contemporary composition to the limit. Dave Cureton & Adam Gough’s unique way of blending genres in their compositions has become their trademark and in turn, become known as the “IO Earth Sound”.
IOEarth’s self titled debut album was making big waves in the progressive rock community even before it was released back in 2009. Their internet following, from day 1 dubbed “The IO Earth Family”, is often cited as a big part of their success, and it was them once again that elevated IO Earth by almost completely exhausting the supplies of their 2nd album, “Moments” in 2012 while it was still only available on pre-order. 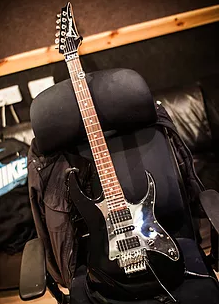 While their last release, a live album recorded at RoSfest, Gettysburg in 2012 was a much welcomed addition to their discography, the questions on everyone’s lips have always been… “Can they do it again? Will they be able to top “Moments” with a third studio album?” On the basis of their demos so far, it seems that Dave and Adam are confident that they can.
Founder member Dave Cureton says: “We are very excited about returning to the studio to make this album. Adam and I have been writing new material for a while now and we can say that these pieces are sounding amazing. We believe that we have pushed ourselves to create the most exciting IO Earth album to date.”
Founder member Adam Gough says:”Once again, we are treading new and exciting ground as we explore genres and styles that we haven’t touched on before. We can’t wait to get to the studio with the demos we have so far and hear them reach their full IO Earth potential. This album will also showcase IO Earth’s new vocalist ‘Linda Odinsen’ who joined the band in April 2013 for their ‘Cruise to the edge’ performances in the USA … And she has one or two surprises in store for her new found fans!”
Linda Odinsen says: “I am extremely excited and proud to be featuring on the new IO Earth album. We have already started work, and even though we are only in the early stages I already know it is going to be exceptional. The music is both powerful and emotive, I can not wait to share it with the world.”
IO Earth will start recording the third studio album, “New World”, in 2014 with long time producer, Miguel Seco.
There is no denying that IO Earth have been the hottest property on the progressive rock scene since that first album appeared, seemingly out of nowhere. Where else can Dave and Adam take us with their fearless exploration of everything that music has to offer?